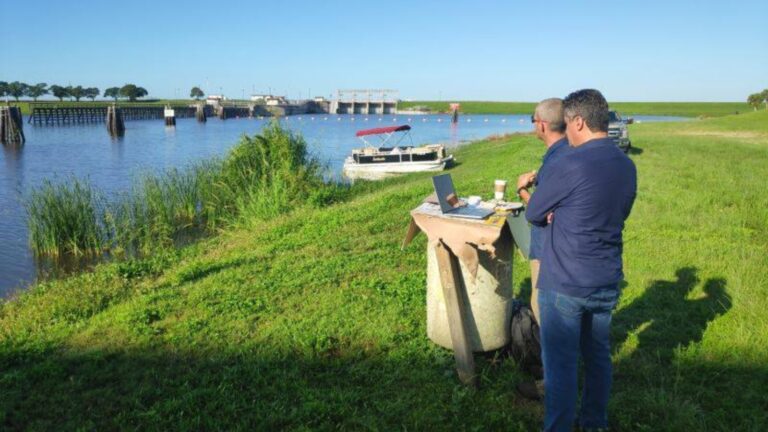 Florida will use BlueGreen Water Technologies’ treatment to stop harmful algae blooms in Lake Okeechobee from reaching the state’s waterways.

Lake Okeechobee, also known as Florida’s Inland Sea, is the state’s largest freshwater lake. It has become overrun by cyanobacterial blooms (“blue green algae”) that render the water toxic for drinking and agriculture. It’s also not safe to eat fish from the lake or to swim in its waters.

Left untreated, cyanobacterial blooms can hijack all the resources in a lake or reservoir and turn it a dead aquatic zone.

With the toxic algae of Lake Okeechobeee threatening to spill into the surrounding ecosystem via the C-44 Canal, Florida Governor Ron DeSantis gave the go-ahead to deploy BlueGreen’s tech, which applies a nano-coating to existing anti-algae chemicals, making them significantly more effective.

Results can be seen with 24 to 48 hours, CEO Eyal Harel told ISRAEL21c in May.

Existing algicides, Harel explained, sink too quickly, missing much of the algae bloom on the surface of the water. This requires more chemicals to be used, driving up the cost and adding potentially harmful substances into the water.

BlueGreen’s Lake Guard pellet solution is tossed into the water; the active ingredients are released from their coating within four to six hours.

BlueGreen, which launched in 2018, is already working with most of the water reservoirs in Israel – some 600 of them.

In February, BlueGreen treated the 4.4 square-kilometer Roodeplaat Dam Reservoir near Pretoria, South Africa. It also treated the Nanhu Lake in Yueyang, China. CGTN said it was the first time the lake saw clear water in 12 years. BlueGreen’s first overseas deployment was at Chippewa Lake in Ohio in 2019.

“Harmful algal blooms have a debilitating effect on our ecosystems and our communities,” said DeSantis. “That is why, for the first time, I made it a priority to secure dedicated funding to deploy innovative technology to mitigate blue-green algae blooms.”

BlueGreen’s head of US operations Dr. Waleed Nasser says that say that “the modular nature of our technologies allows us to be able to respond to any emergency within hours from call.” BlueGreen works with a local partner, Modika& Associates, in Florida.

BlueGreen has two commercially developed products, Lake Guard Blue and Lake Guard Oxy. The latter is the version being used in Florida.

For over 16 years, ISRAEL21c has brought you the faces and places of Israel every day, spreading the word about Israel to millions of people in virtually every country around the globe. First of its kind, our content is originally researched, written and produced by seasoned experts directly from Israel.

We cannot do this without financial support from people like you. Become a GEM member and enjoy exclusive briefings from our staff and more – for $18 a month.

Brian has been a journalist and high-tech entrepreneur for over 20 years. He combines this expertise for ISRAEL21c as he writes about hot new local startups, pharmaceutical advances, scientific discoveries, culture, the arts and daily life in Israel. He loves hiking the country with his family (and blogging about it). Originally from California, he lives in Jerusalem with his wife and three children.